By the Glow of the Cave Fire

As cataclysmic snow storms buried the US Southern states, I snuggled into a blanket at my brothers house in North Carolina.  Folks here reacted with expected levels of end-of-the-world fear as the snopacalypse approached.  Local TV stations offered round the clock coverage that could be summed up in the sentence “Cold water falling from the sky, don’t change the channel or you will die.”  Neat, that even rhymed.

Disaster was generally avoided.  Power stayed on here, which was my biggest worry.  As long as I have internet, the world can go ahead and come to a terrible end without troubling me too much.

One of my favorite moments was a snippet of a cell phone conversation I overheard as I was pushing a shopping cart around the local super market getting some disaster supplies: cheese dip, tortilla chips, wild cherry pepsi, Fritos and Ding Dongs.  Essentials.

“I’m at the super market now.  Don’t worry I’ll get everything before they run out of food.” Said the frantic looking shopper as he scurried off to aisle 4 to get his emergency supply of Campbell’s soup.  It struck me that only in a supermarket of this size could one consider running out of “non-fat soy milk” and “gluten-free hor d’oeurve crackers” to be “running out of food.”

For my part I wasn’t able to get bananas.  My god!  What will I do?  Where will I get my potassium!  It could be days before they can restock fresh bananas!

My favorite reaction to catastrophe comes from a friend in Tokyo.  In the days following the tsunami and following disaster at Fukushima as people thronged the supermarkets to get essentials, something that turned out to be wholly unnecessary, he went online, clicked a few buttons and ordered 6 cases of bottled water to be same-day delivered to his house by Rakuten (the Japanese equivalent to Amazon).  That is my kind of disaster prep.

Supermarkets in Tokyo were out of supplies for a few hours the first night of panicked shopping, but by the next morning they were restocked (despite one of the largest earthquakes in recorded history, a tsunami that killed tens of thousands and a nuclear leak).  That is a fairly impressive feat.  Post disaster binge shopping, mostly people were left thinking “Crap! What am I going to do with all these cans of beans?” It makes me wonder though, if advanced nations really understand what “run out of food” means.

I think what it really means in modern day America is “run out of my preferred flavor of yogurt.”  You don’t have to think hard to come up with a list of places on the planet that (on a good day) run out of food.  So, I think we could probably take our fear level down a notch in situations like this.  Looking at my brothers pantry (see the post I wrote about size) I figure we could have survived comfortably for a few weeks before we would have been missing enough calories to have barbecued the basset hound. 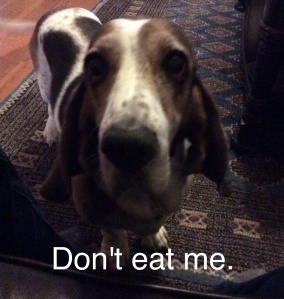 It’s sort of like the feeling you get when the internet goes down or you forget your cell phone.  That odd, panicked feeling of unease accompanied by no real danger.  Though, if memory serves me correctly, I lived much of my life before the internet.  What did we do then?  Oh my god… talk to people in the room?  Read books on paper?  Board games?  The horror!

Spending time with my brother and his family has been wonderful.  It is the best part about being “home.”  As much as I love life in Tokyo, a city where you can do anything, this is one thing I couldn’t do: spend time with those I’m genetically stuck with for life.  A small part of me even thought a power failure might have been fun.  It would have been a great excuse to sit around the glow of a propane lamp in the living room and chat, as we did on those many camping trips of my youth.  I don’t think his faux fireplace would have toasted marshmallows, but they probably would have run out of the kind I like at the supermarket.

I take our near miss with being sent back to our stone age origins as a reminder that the reason we developed speech was probably to have something to do while sitting around a comfy cave fire on a frosty neolithic night.  Now we have internet and TV, has communication really improved?  Maybe the internet is just our new fire and this blog is my e-cave.

5 thoughts on “By the Glow of the Cave Fire”